The Fallacy That is Barack Obama’s Next Car 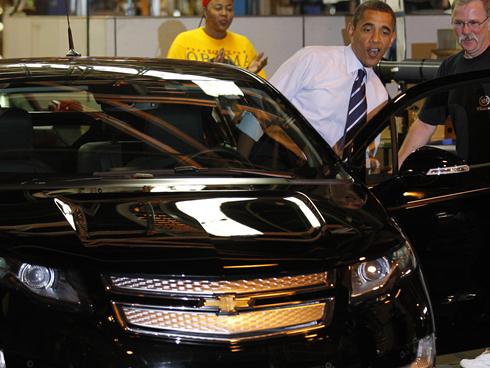 I’m sure you’ll have no problem finding one in January, prez! ZING!

Obviously our fearless leader is plugging this trainwreck of a vehicle because of the administrations financial stake in General Motors… and to fellate the United Auto Workers union.

None of the above bothers me, because it’s expected politics.

What does bother me is how GM markets this vehicle. They’re pretty straight up in their commercials:

“It still takes gas… if you want to go farther…”

Yeah…. if you wanna go farther than 35 miles. And the fine print is there to explain it’s golf-cart like range… Then the gas engine kicks in to extend the range…This isn’t even so bad.

It’s what’s on Chevy’s Volt website that really pisses me off:

“I love the ability of being able to not burn any fossil fuels at all for many of my trips,” says Volt owner Jim Jonah.

That’s right, Jim Jonah…. No fossil fuels are burned during your trips. Because your car is mostly running on its battery. However…..

Well some people are…. I was talking to one of my buddies and he, though not currently a Volt owner, echoed the sentiments of the made up Jim Jonah: Plugging the car in every night and only taking short trips requires no gas. No fossil fuels are burned. I had to explain to him that the outlet you plug the car into isn’t powered by unicorns and rainbows; but more than likely a coal fired power plant. And coal, my friend, is a fossil fuel.

Then he started spouting off about savings. Electricity is cheaper than gas, I won’t argue that. But the 4-seat Volt costs $40,000. Compare that to my gas guzzling 5-seat VW Jetta at $17,000. That’s a $23,000 premium one must pay to play the hybrid vehicle game. So how long does it take before savings is actually realized?

Based on numbers provided by the Environmental Protection Agency:

Hell, the battery in the Volt won’t last that long… wonder what that 435 pound behemoth costs to replace?