Definition of Cat… Continued ~ Cooperation Between Feline and Canine…

Alright… this is getting ridiculous.

Little bit of background on the dog, Bernie…

Dude has an affinity for crayons; specifically… eating them! I dunno why. He’s fed well, with premium dog food and receives treats pretty consistently. But if my little one is coloring and a crayon somehow finds the floor, he’ll eat it.

One time, he ate a shit ton of crayons that were left on the dining room table; rainbow colored shit for two days!

Because of this, I make sure that little “D” puts her crayons away when she’s done with them.

Even though she now does a good job of putting her crayons back in the crayon tower, however, I just witnessed the stupid cat pulling a crayon out of the tower, dropping it on the table and pushing it onto the floor so Bernie could eat it!

I wish I had time to get a video of it but I was too busy getting pissed!

Now that the evil cat is “feeding” crayons to my little buddy I like him even less if that’s possible.

I’m going out of town tomorrow morning. Maybe I won’t leave food for the cat until I return on Sunday. Eventually he’ll learn his lesson, right?

78 days ago and earlier, all was peaceful here at For Shiggles central command. The girlies and I would go about our day to day activities with little drama.

Little did I know that for a few years, my daughters had been planning a very twisted way to kill me. With a cat…

Immediately upon my move into this town house they recommended I get a cat; not for me, but for them.

GIRLIES: Dad, get a cat.

… who is just like a cat, except he has a brain, a conscience and manners..

The girlies never gave up… this conversation happened many times for over three years. I always resisted.

Everything was going well. As far as sleeping arrangements go, Bernie has his chair in my room that he sleeps on. Well, he starts on the chair but ultimately ends up on the bed. That was then, of course.

77 days ago, the girlies caught me with my guard down and talked me into going to “look at” kittens. I failed miserably and ended up adopting this piece of shit… 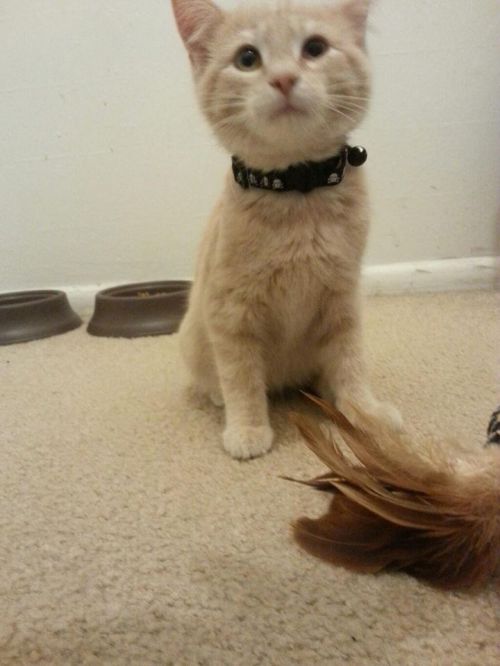 Nothing has been normal since…

He is always knocking stuff off of every possible surface… he has even attacked me.

He no longer allows Bernie on the bed. Wait, I take that back… He’ll let Bernie get comfortable and then bite his tail or mess with him until he gets pissed and goes back on his chair.

Fast forward to this past Thursday… the little fucker wakes me up at 5:00 am by walking across my face. Instead of punching him, like I usually do, I gently scoop him up to drop him off the bed. He wasn’t having any of that. To prevent his fall he dug his claws into my wrist and hung on for a couple seconds before I shook him off. Grrrrr…. that shit hurt!

Last night I banned him from the bedroom… that’ll teach him, right?

This morning I woke up to find the blinds in one of the girls’ rooms AND the treadmill room yanked out of the brackets and tangled on the floor. The vertical blinds in the dining room were all jacked up too, and wouldn’t open until I spent 20 minutes snapping them back into their tracks.

Dear God this thing is a 7 pound furry tornado!

He is now sleeping peacefully… in Bernie’s bed.

Every morning around 3:00 is when Mingo wakes up and decides it’s playtime. Part of his fun is jumping up on the night stand and knocking everything that may be there to the floor. Because of that, I try not to leave anything on the nightstand. My lava lamp is there… and the remote and my phone. For a while there two thumps would wake me up; the remote, then the phone getting knocked on the floor. After that, he circles my lava lamp… as if to say, “Wait’ll I knock THIS thing down..” The third thump, the one my neighbors prolly hear, is me rolling out of bed to fumble around to find my phone and make sure the alarm is still correctly set on it.

Oh yeah, if you ever get a call or incoherent text from me shortly after 3:00 am it’s most likely NOT beer or Jäger induced activity, but an inadvertent touch of the screen while making sure my phone’s okay.

Anyway, for a few nights the same thing would happen and I’d remove Mingo from the night stand. I think he got it because he stopped doing it. Maybe the thing does have a brain!

Oh but he found something new to play with!

I normally sleep with one foot out of the covers. At precisely 3:04 this morning, that little piece of shit pounced on my exposed foot and bit my big toe. I’m sound asleep; I dunno what’s going on, so my first reaction is AHHHHH GET IT OFF!!! I kick my leg and the cat goes flying… a good 2.3 seconds of hangtime!

That little asshole drew blood, too, with his sharp as knives little teeth!

I’m thinkin’ maybe I should start feeding him again… 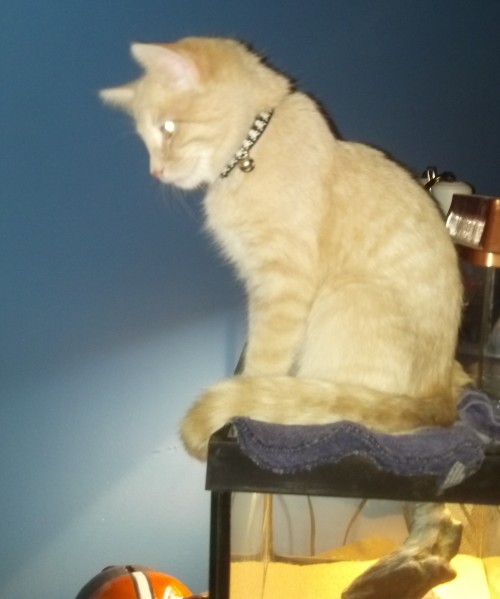 I get home from work today to discover this!

That is my daughters crayon tower. It holds 150 crayons… unless it gets knocked off the fucking table by the stupid cat! Grrr that animal pisses me off!

I yelled at him and he just looked at me with this brainless stare. Ya wanna know who expressed guilt even though he didn’t make the mess?

…Bernie. I’m reprimanding the stupid cat and Bernie puts his guilt face on like HE did it.

So I kicked that damn look right off the cat’s face! Oh he flew good this time!

Bernie and I feel much better now. I’m gonna try not feeding the cat for a few days; maybe that’ll settle him down.

“My anaconda don’t want none… Unless you’ve got buns, hun..”

I regularly read this football blog that is called Kissing Suzy Kolber. Go ahead and Google “Joe Namath and Suzy Kolber” to find out where their website name was derived from. It’s quite humorous!

It features a freakin’ 1/4 mile long anaconda stalking, and eventually ingesting, a capybara. I guess a capybara is a big ass 100 pound mouse? Or just a rodent? I dunno… I DO know that some of the footage in the video shows a huge snake just slithering around… and it’s TERRIFYING!

If I were anywhere within 50 yards of a snake that big, I couldn’t shit my pants quick enough before running away…

See for yourself…. the thing is scary as hell on land, under water… it doesn’t matter! It’s like a Navy S.E.A.L. without the Navy or the S.E.A.L.

Oh how my mind wanders… I mention Navy S.E.A.L., think movie… and all of the sudden, “Under Siege”, starring Steven Seagal pops into my head… However, Seagal doesn’t pop up…. but the girl who jumps out of the birthday cake… Erika Eleniak… “pops up”! Like this: 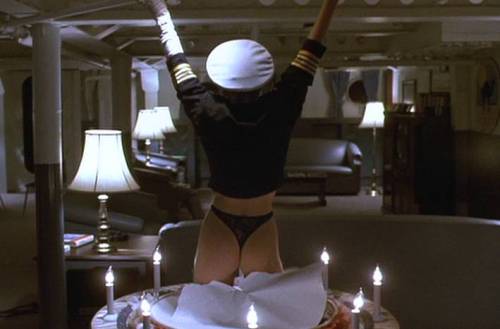 Then I find this….

Love your children and hug them every day.

I’m Not a Fan of Cats, Nor Am I a Photographer….

….But these are some pretty awesome pictures I took of a Cheetah at the Cleveland Metroparks Zoo several years ago.