Well… sort of tape delayed from Berea, as we were there several hours ago.

This morning started off with a bit of nervousness on my part. As I was heading over to Brent’s house to pick up him, Scott and Garett, the intersection of Pearl and Grafton was blocked off by police as some 37,000 cyclists went by. I absolutely HATE being late, and the seven minutes I had to wait felt like an eternity. When I finally got to turn I got stuck behind this:

I still made it to Brent’s a few minutes before 8:00, only to have to wait a few more while Garett was held up by more cyclists. Turns out today is the Bike MS Pedal to the Point. Since it’s for a good cause… I’m no longer angry.

We made it to camp a few minutes before practice started. Finding the right place to stand is always a gamble as they have four full size fields and you have pick an area, hoping they’ll do 11 on 11 drills right in front of you. We picked wrong.

We thought we were golden because the tight ends were running some drills right in front of us.

Seriously… I hope WR Greg Little starts catching balls this season. Dude had way too many drops last year. As far as tight ends go, I think we’re stacked! Evan More is my dude as I’ve always been a fan of the big white tight ends!

The new Browns owner, Jimmy Haslam III was in the house…

From across an unused (well, the kickers were lounging around right in front of us) field, that’s Jimmy Haslam, white hair, grey t-shirt, talking to Mike Holmgren. Never figured out who the guy with the goofy hat is. Click to embiggen!

There has been a lot of speculation that Mike Holmgren will be gone with the team changing hands. Brent had a good point about Holmgren. If Haslam was really gonna get rid of him, why would they hang out together for the entire practice? And look at Holmgren’s resume vs. that of Joe Banner, the former Philadelphia Eagles president, who is rumored to be coming to Cleveland. My sources tell me that Banner is merely a salary cap specialist. Holmgren should stay.

Here is the entire team before calisthenics… 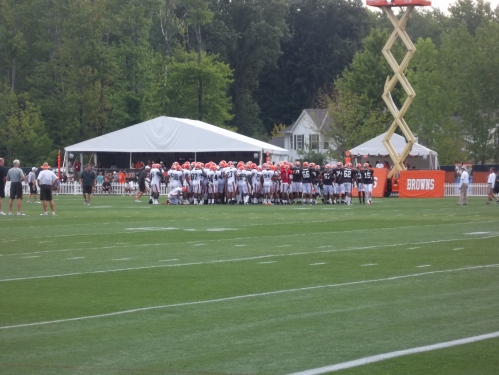 Ladies and gentlemen…. I present to you, BRANDON WEEDEN.

Sorry for the grainy photo quality!

He will be named the starter and the Browns need to get rid of Colt McCoy. Even though they were on the opposite side of the complex, we could see a clear difference between the two QBs. Weeden connected on some nice passes. Hell, he threw a bomb to the speedy Travis Benjamin which would’ve been an easy touchdown, had Benjamin not dropped it. I know… it’s only practice. YES IT IS, but McCoy still threw bad passes, picks and a lot of short dumps after not finding an open receiver…. IN PRACTICE.

So why should the Browns get rid of McCoy as opposed to keeping him as a backup? The four of us figured that out too! Undoubtedly, there are fans and probably even some players who feel that McCoy should get another shot at starting. He shouldn’t, because Weeden looks way better, but by keeping him on the roster it’s just gonna create another good old fashioned Cleveland QB controversy. When Weeden throws a pick or has a bad game, and he will, everyone will call for McCoy if he’s sitting on the bench. They won’t do that if it’s Seneca Wallace sitting on the bench… or that Thad guy. Besides, and I’ve said it repeatedly, McCoy and Wallace are the same player, except that Wallace is blacker and faster and is more familiar with the West Coast Offense. So goodbye, Colt. Enjoy your upcoming starting job in Jacksonville!

Funny moment: when the QBs walked over by us, McCoy was the one who carried the bag of footballs… that cracked me up!

Okay… Now I’m gonna absolutely gush about RB Trent Richardson. Holy shit is he put together nice… just a block of muscle. If I was into guys…. look out Trent!

These stupid pictures turned out a little fuzzy and that pisses me off… stupid camera!

This is Richardson behind FB Marecic off left tackle. Can’t wait to see this in a game, because it’s gonna be huge! 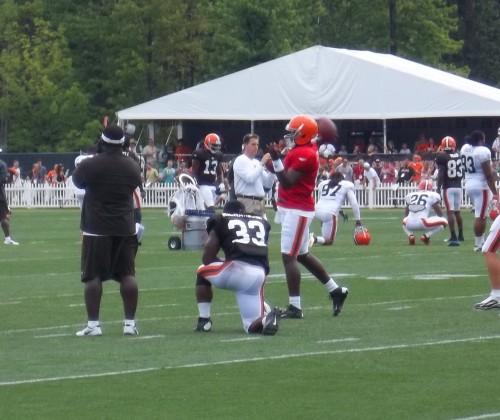 Here’s Trent Richardson “Tebowing.” GOD I’m so sick of that term. NFL players have been kneeling down for years. Just because the God-fearing, gay, Tim Tebow does it they have to give it a name? He’s simply KNEELING, people!

I’ll say this much about our RBs. We’re deep there too! Montario Hardesty is finally healthy and looks great, Chris Ogbonnaya appears pretty stout and even Brandon Jackson looks good. I see Jackson, however, going to Pittsburgh after Ben Roethlisberger rapes Rashard Mendenhall.

Loogit that! BW3 throws with so much zip that the ball is blurred just a couple of feet from his hand!

Here is a random Ahtyba Rubin shot! I’ve never seen 330 pounds of D-lineman run this much! Either he or DE Jabaal Sheard will be OWNING Michael Vick in week 1! 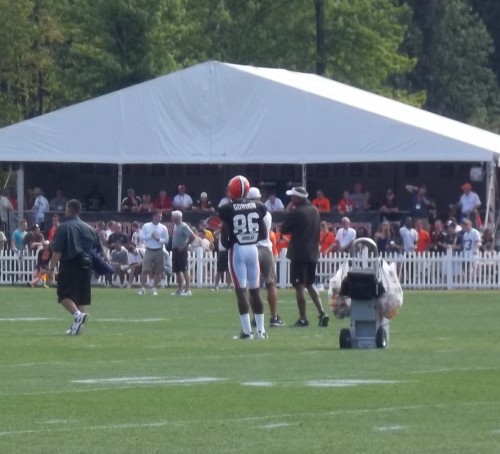 He’s a big, athletic kid; has had a great camp thus far and looked really good today! Does Cleveland have a Calvin Johnson aka Megatron? I believe we do!

Oh yeah… We got to see a season ending injury today, not that that’s what I look forward to! LB Chris Gocong blew out his achilles while attempting to defend an endzone pass. Brent has assured me that this will not be an issue. We’ve got younger LBs that can step up and make a difference.

Gocong’s injury was Colt McCoy’s fault by the way…

We had a great time at camp, though we were far away from the action. It’s always a blast to see the Browns have a great practice! I’ve got a feeling Cleveland’s gonna kick some ass this year… prolly even make the playoffs!

Super Bowl? NAH! I’m realistic… The Patriots will beat us in the AFC Championship game this year.

But next year? Cleveland over Detroit in the Super Bowl, 23-17!

Hug your children and love them every day…

The 2012 Edition of Cleveland Browns Training Camp is Underway ~ And I’m Goin’!

It’s that time of year folks! Browns training camp started back on July 25th for rookies… and the entire squad on the 27th!

Our scout team will be descending upon Berea this Saturday for a full pad practice; this includes Brent, Scott, Garett & myself!

On Friday, though, and through this past weekend I got most of my camp updates from twitter as I was on vacation. But yesterday evening I started some more serious research.

As is usual, the local media is still trying to fire up the ole quarterback controversy; this year between the short, weak, concussed Colt McCoy and the built-like-an-NFL-QB, rocket armed Brandon Weeden. 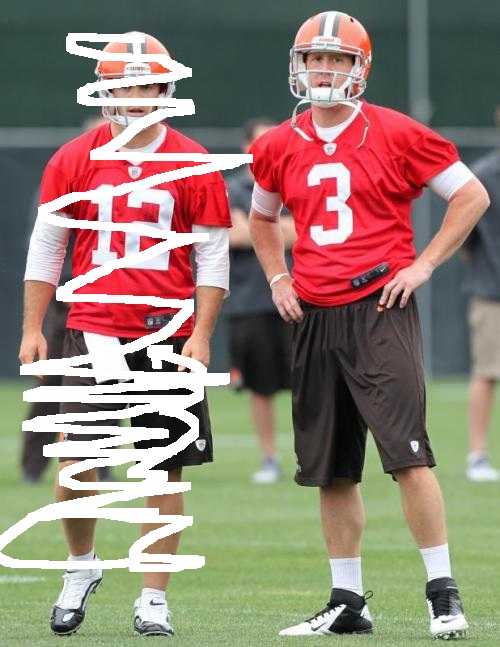 There will be no QB controversy this year, so you’re wasting your time Mary Kay Cabot!

See how creepily Mary Kay is looking at me? Oh you just wait ’til I’m in Berea on Saturday… try to control yourself as I walk by!

Weeden will be named the starter and McCoy will end up in Jacksonville because Blaine Gabbert looks like me playing QB… in my bare feet… after a couple beers!

Anyway, here are some other players I’d like to get a look at on Saturday…

I don’t need to evaluate T-Rich on Saturday. I already know he’s gonna be a stud. I’ve seen his highlight reel and posted it on here. He, and don’t laugh at me without watching his highlights, plays like Adrian Peterson. Dude’s fast, cuts well, and does not shy away from contact. I also think he blocks better than AP… but that’s just me. We shall see, but just look at this dude: 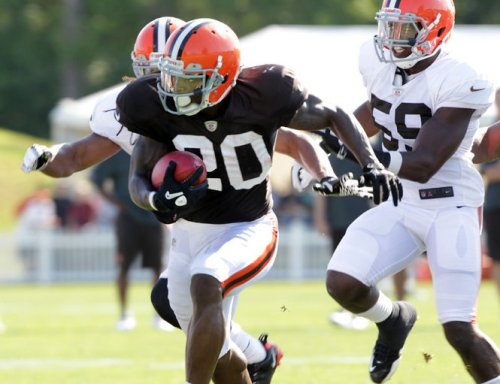 Oh Montario! You with the ligaments seemingly made of spaghetti! UGH! The Browns selected Hardesty in the second round of the 2010 draft. He tore his ACL after 6 nice carries in a preseason game against Chicago. Out for 2010. Last year he suffered other injuries which I’m too lazy to look up right now, but wasn’t a factor.

This is Hardesty’s first healthy camp. I hope he remains healthy. With the above two RBs, the Browns will have a serious ground game..

But we can’t run on every down! So the future hall of famer, Weeden, needs someone to throw to, right?

Oops… THIS is Josh Gordon…

I’m sorry… I couldn’t help myself. But Josh likes his weed… hopefully he’s done with all that because dude is a physical specimen. Because of his off the field problems in college, Gordon could end up being a steal for the Browns. He entered the NFL supplemental draft instead of playing this year. Had he played in school this year, rumors are he’d be a

Every team needs that little speed receiver. I’ve seen his teammates tweet about him being the fastest on the team. I’ve seen his highlight reel as well and because of that, I’ll continue to compare him to Philly’s DeSean Jackson… without the diva attitude.

Hug your children and love them every day…